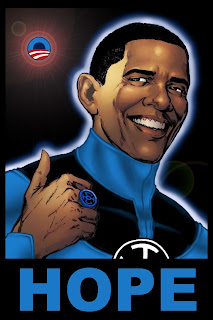 Obama, I understand, is a big ol' geek. That's why I'm sure he'd love this rendition of himself as Phil Jimenez's Blue Lantern.

The great thing about naming one's blog in such a way as to disabuse readers of any notion of timely updating is that no one worries when I haven't posted in over a week. This state of affairs might have gone on for another week, but my fiftieth birthday is Saturday (today), which is a big enough deal that maybe some of you would be put off if I didn't tell you.

Not that I'm doing all that much interesting for my birthday. I'm taking a friend to the airport, meeting up with my daughter, and going to a comic book shop where I will also meet up with a friend who has never bought comic books but thinks it might be cool. And we will eat. I think I will try a Greek place my daughter goes to with her best friend.  Then we will go to Goodwill to rid ourselves of things we can no longer wear. Then we will go to Half-Price Books to rid ourselves of books we have done with and to buy new used ones. And then I will be exhausted. Gad, what am I doing? That's a lot of standing and shopping for one day. My knees are already preparing their protest, I can tell. They are busy with poster paints, picket signs, and giant puppets. But I can assure them, my plans include plenty of sitting down time. And I have a cane that unfolds into a seat, which works well for browsing for comics and books.

Which reminds me.... I went clothes shopping last weekend, since I've dropped too many sizes to keep on wearing my old stuff. While I was at the mall, I spotted another woman, about my age, making her way into the parking lot with a look on her face and a gait that I recognized instantly. She was in agony, every step sending waves of pain from her feet up into her brain, and all she could think of was to keep moving, to get to her car, to sit down. She nearly stumbled into traffic but showed no sign on her face that she saw anything beyond her own pain. And she was wearing what passes for comfortable shoes, so I know this wasn't the first time. Sister, I feel your pain. Where's your cane? It needs to be your next purchase.

Oh, other excitement today. I mean, Friday, not today which is Saturday. (No, I haven't gone to sleep yet. Yes, it is 3 am. Why do you ask?)  I had my first full fledged asthma attack in quite some time. Oh, yeah, I always have asthma, and generally have some symptoms. But except during ragweed and pollen season, when I'm prepared, I haven't had any serious problems in several years. Damn, I had forgotten just how much I hate it. Guess I'll sleep sitting up tonight. Which is today. Er. Man, my sleep schedule is just a mess.

So, why am I going to the comic book store for my birthday? Oh, you tell me what else I should do when I am severely single and my birthday falls on a day dedicated to romance, and every freaking event in the city is geared toward couples? Dammit, I'm going to commune with my kind. It's been over six months since I last had the time to go, so surely there's something waiting for me. I wish Dylan Meconis's Bite Me was out already, but I guess I'll just have to use its coming out later as an excuse to make another foray sooner than six months. At least, it better not take 6 months to finish its journey from web comic to bound graphic novel. I wants it now!

Speaking of vampires. Sort of. Last month's most interesting geeky fun was watching Kamen Rider Kiva, the touching story of a young man, abandoned by his vampire mother, raised by a mechanical bat and a possessed violin, who lives in a house with the best bathtub in all Japan and the worst locks. Seriously, if I'm taking a bath and people keep showing up and climbing in with me, I'm seeing the landlord about my deadbolt. But I really liked the character development of the story, and wish it had gone on longer so more could have been done. So far, the current Kamen Rider isn't as promising. The worst photographer in 10 worlds has to fight monsters on 9 worlds in order to keep the 10 worlds from collapsing into each other. Ummm. It's being called "Crisis on Infinite KR Worlds" by toku followers, and since versus-type stories don't appeal to me, this one is rather leaving me cold. However, Donut, I mean, Decade, does have a "light red" uniform, so I am at least amused. Oh, and Heroes is back. The entire issue of Daphne's CP seems to have been dropped. Why is it that a TV character only has a disability when it is convenient? I'd like TV shows to reflect the reality that disability is everyday, not just as a plot device. Thus, Kiva failed when Nago's eyesight came back miraculously, but succeeded as Wataru, even though he got better at coping, continued to grapple with his rather substantial psychiatric issues all the way through the series. Heroes, can't you take disability more seriously than a kids' show?

Well, now, this post has been all over the place, hasn't it? Happy Valentine's Day, all you couples and triples and whatnot out there. And the rest of you, this is my birthday, so celebrate it with me. Surely there is a comic book calling your name.

I read in Media Dis & Dat today of a new park being built in San Antonio, TX. Morgan's Wonderland, named in honor of his daughter, will be what is probably the first-in-the-world public park with dedicated primary use for visitors with disabilities.  Philanthropist/developer Gordon Hartman has even managed to bring the city, county, and local school district in on the project, and is making sure to keep records of the process so that others will be able to duplicate his efforts. Non-disabled children and adults will also be using the facilities, but at this park, disability is not an after-thought or add-on. How neat!