Shall I call it pain?

It's creeping up on 1 am, and I don't know if I will be able to sleep or not. I was having waves of (?)pain(?) flow through me. I've taken half a Darvocet in the hopes that my body will now leave me alone enough to let me sleep. I know, half a Darvocet doesn't sound like anything, but indulge me my stubborn insistance that maybe this time, I can get away with it.

I'm supposed to be keeping a sleep diary for a couple of months, to see if there is any connection with the migraines, and also because I get sleep attacks. I've never been able to sleep really well, and for the first time, I am wondering if I get these paroxysms while I'm sleeping and if that isn't what wakes me up over and over again.
Posted by yanub at 12:48 AM 2 comments:

R!M knows just how I feel

Girl, Dislocated asks me what Raaaahr! Monster is.

R!M is a felt soft sculpture (that's "doll for grown ups") who understands just how I feel. 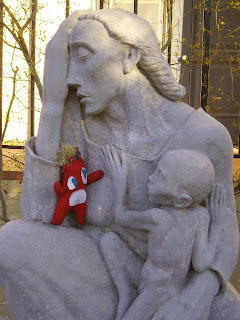 I fell in love the moment my eyes met R!M's. You know how, as an adult, you stifle how you feel and just tough it out through your frustrations and pains? Maybe you don't. Until I got R!M, I hadn't realized how distant I was from my feelings. R!M is small enough to travel in my purse and very light, so I'm not weighed down (I can't carry extra weight easily; it hurts my shoulders). And R!M made going to the museum much more fun. I don't think I'd have been able to ignore my swelling knees and fainting feeling half as well without R!M to distract me by posing for pictures. I can't take pix of MD because, the silly girl, camera flashes in her face trigger her seizures.

I know MD has some larger monsters, that I think she is asking $20-$30+postage for, depending on how complex they are. I will ask her if she still has some purse-sized ones, which are simpler and smaller. I think she may also have some mermaids left from her last round of soft sculpturing.

I have to say, it's great for me to have a monster who can help express fierce emotions. R!M reflects my feelings, and is also handy for a cuddle. I mean, I do have a bear, but she's long-since retired from being my emotional proxy and in much worse shape than I am, the poor dear. She's currently hanging on a wall, striking fear into the hearts of kith and kin. My sister says she looks like she's been crucified. But really, Theodora is just keeping an eye (she's only got one) on things. She's happy to leave blogging and trekking all over the place and getting shoved out of bed and stuck between cushions to R!M.
Posted by yanub at 11:05 PM 2 comments:

Raaaahr! Monster gets its reward 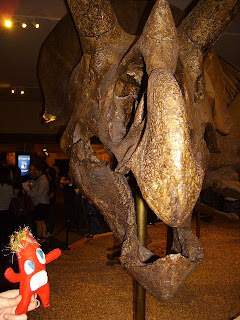 Raaahr! Monster gave me plenty of sympathy and care during my last migraine, helping me go to work and sleep and everything I needed to do despite the fact that I was nauseaus and hurt 5 days running. As a reward, Raaaahr! Monster got to do fun things with me and MD this past Tuesday, when we went to the Witte Museum in San Antonio. Sadly, we did not get to take pictures of Raaaahr! Monster at the human body exhibit, but R!M still got in plenty of mugging for the camera.

By the way, the Witte was pretty accessible, though parking still stinks. Wheelchairs are free to use, which is nice. The Pecos River exhibit is annoying for wheelchair use, since the floor is made in imitation of the caves. And they could do with some better thresholds to help get from one floor surface to another. There's a children's area that doesn't appear to me to be accessible except maybe to an adult who is watching. A kid using a wheelchair would be left out of the fun.

(If anyone wants a Monster of their very own, MD handstitches them inbetween rolling her eyes in her head and incomprehensibly mumbling. Email me and I'll let you know what her current inventory is.)
Posted by yanub at 4:49 PM 1 comment:

As I hope most people know, rape is tool of violence and oppression, not of sex. And in a situation of civil upheaval, women become the targets of those who seek to impose their will on the entire country. The increased incidence of rape in Kenya due to the ethnic strife there has led to a surge in the need for emergency contraception and rape counseling.

It is easy to feel helpless regarding violence elsewhere in the world, and to retreat into apathy. Please fight the apathy by donating to Planned Parenthood's Kenya relief effort.
Posted by yanub at 10:50 AM No comments:

Score one for the handicapped!

The image at left takes you to a comic page PSA (public service ad) from the 1950s and '60s, Score One for the Handicapped. There you will find the intrepid good boy, Buzzy, scolding bad boy Wolfie about his attitude toward their deaf acquaintance. You'll also find that said deaf acquaintance is most assuredly not Deaf. It's an interesting look at what inclusion meant 50 years ago.
Posted by yanub at 9:07 AM No comments:

Have I mentioned I hate migraines?

Sunday, I developed a migraine to go along with the shredding feeling in my joints. As a front moved in during the night, I lay awake hoping the weather would get worse, faster, instead of hanging on and on and on.

And so I got up Monday feeling as bad as I went to bed on Sunday. And then Monday was the worst, busiest, most hellish workday in quite some time. Afterward, I couldn't even drive home for three hours.

Surely Tuesday would be better, right? Well, at least work was better. And the migraine had moved into my abdomen, clenching my head only every few minutes instead of constantly. And my joints were doing better.

Wednesday, I finally saw the doctor to get something for the migraine. There is no way that medication is worth $240. If I hadn't already been sick to my stomach, seeing that pre-insurance portion of the bill would have made me nauseous all on its own. As it was, I had to pay $70 for something that didn't do a darn thing for the abdominal migraine--unless you count the ability of a med to be vomited to be something worth paying for. Work went OK, in between the puking. Oh, and Doc? I appreciate your assumption that I would stay home and rest and take care of myself, but if I was to do that every time I felt pain or nausea, I'd need to go on disability. And how would my rent get paid that way? Not very well, thank you.

My migraine finally mostly broke Thursday. Yay! Did that expensive medicine do it, or the fact that the freaking front finally finished moving in? I suspect the front.
--------------
Edited to add:

My friend Dr. Kindberg says that most migraine medication taken after a migraine has already started in earnest will take 24 hours to work. So maybe it was the Zomig working that broke the migraine. I've used it earlier on since, and have managed to ward off any lengthy pain, despite having spent the past month in the throes of moving house, which has disrupted all my routine. Still, that's damnably expensive stuff.
Posted by yanub at 2:19 AM No comments: